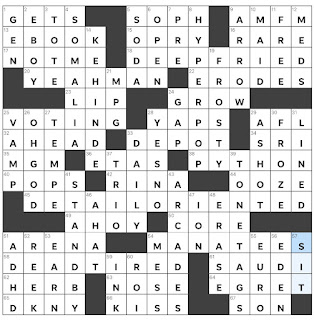 Theme Answers:
DEEP FRIED (18A: Like many state fair foods)
DETAIL ORIENTED (45A: Attentive to the small stuff)
DEAD TIRED (58A: Completely exhausted)
Theme synopsis: INDEED, each theme answer is IN the word DEED.
Things I learned:
Random thoughts and interesting things:

I have previously written about INDEED being a word I use frequently, so I was delighted to open up this puzzle and see INDEED as the title. In addition to the answers I've already highlighted, I also liked FROSTY, FROZE, NOT ME, and STAND BY. Thank you, Kelsey, for this puzzle that was, INDEED, a great way to begin my Tuesday.
Kelsey Dixon