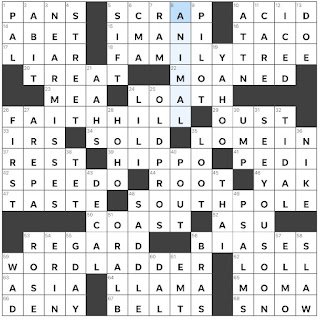 Theme Answers:
FAMILY TREE (18A: Diagram with branches)
FAITH HILL (26A: "This Kiss" singer)
SOUTH POLE (48A: Place from which all directions are north)
WORD LADDER (59A: Puzzle that involves changing one letter per "rung")
Theme synopsis: The last word of each theme answer is something you can CLIMB. You might CLIMB a TREE, a HILL, a POLE, or a LADDER.
Things I learned:
Random thoughts and interesting things:

This puzzle is asking us to CLIMB with it. I appreciated that TREE, HILL, POLE, and LADDER as seen in the theme answers do not refer to physical CLIMB-able objects. It was a nice touch to see this change of meaning. I enjoyed the long-down answers of NEAR MISSES and SEE YOU SOON. There were a lot of ANIMALs in today's puzzle. In addition to the afore-mentioned hog, groundhog, and HIPPO, we also have YAK, LLAMA, DOE, and RAM. Thank you, Zhouqin, for this puzzle that was a fabulous way to start my Wednesday.
No elephant in today's puzzle, but you may recall that yesterday we saw the answer EAR clued as [Elephant part that may be six feet long]. In response to the clue, I commented that an elephant could have an EAR the size of me on each side of its head. Although I am not talented with Photoshop, my husband is, and he kindly created this visualization for me to share with you. It's not perfect - I'm not sure the stock photo of an elephant we used is the kind with the largest ears - but it gets the point across...elephants are large. Enjoy this silliness. 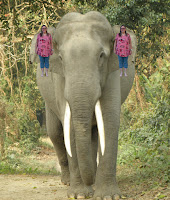