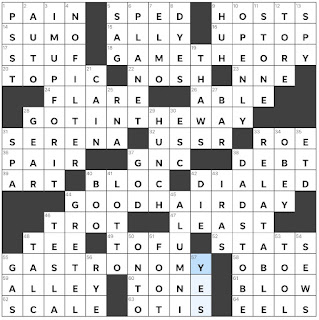 Theme Answers:
GAME THEORY (18A: Branch of math concerned with decision-making)
GOT IN THE WAY (28A: Became an obstacle)
GOOD HAIR DAY (44A: Opportune time for selfies, perhaps)
GASTRONOMY (55A: Study of food and culture)
Theme synopsis: Each theme answer is surrounded by the word GAY.
Things I learned:
Random thoughts and interesting things:

The title of this puzzle made me smile, and I continued smiling during the delightful ALL-AROUND GAY solve. A great set of theme answers here. Choosing a favorite theme answer is tough, but GOOD HAIR DAY may inch ahead with its great clue [Opportune time for selfies, perhaps]. A GOOD HAIR DAY might lead to the use of #NOFILTER, another great answer. I also enjoyed I'M UP FOR IT, DADS TO BE, and RELATABLE. I appreciate that this, AN ALL-AROUND GAY PUZZLE, is the puzzle for July 1. It's a great reminder that while Pride Month celebrations are important and fabulous, Pride is ALL-AROUND and worthy of celebration year-round. Thank you, Rafa, for this puzzle that was a fabulous way to start my Friday.
Rafael Musa