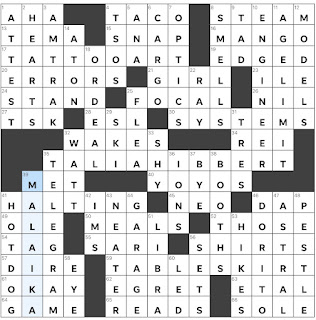 Theme Answers:
TATTOO ART (17A: Skin designs)
TALIA HIBBERT (35A: Romance novelist known for "Get a Life, Chloe Brown")
TABLE SKIRT (59A: Covering that hides legs but isn't a garment)
Theme synopsis: The theme answers are in TART SHELLS, in that each one begins with TA- and ends with -RT.
And now a word from our constructor:
Malaika: This puzzle started as a way for me to highlight the central entry, whose (warning: sexy!) romance novels I am kind of obsessed with. (The best imo is "Take a Hint, Dani Brown!") I am also glad I got to include 13-across, the city where my dad was raised. And, of course, 10-down and 39-down ;)
Things I learned:
Random thoughts and interesting things:

A classic USA Today theme type, and the title let me know just what to expect. Such a fun solve! AGE LIMIT, TELEGRAM, OPTICS, and PESTLE were enjoyable entries in addition to those I've already mentioned. I liked the clue for HEARTS (2D: These: <3 <3 <3). This puzzle was a delightful way to begin my Thursday.
Malaika Handa