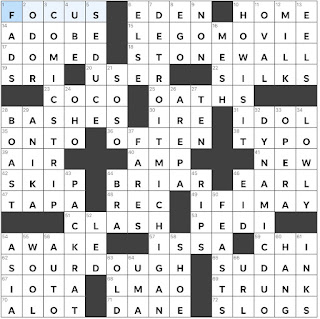 Theme Answers:
COMIC STRIP (3D: "Calvin and Hobbes," e.g.)
DETROIT MICHIGAN (7D: Motown's home)
DYNAMIC DUO (32D: Pair of people who work well together)
Theme synopsis: Each vertical theme answer contains the word MIC. Visually, the MIC DROPs as you move through the puzzle from left to right.
And now a word from our constructor:
Malaika: I really jam-packed this puzzle with things I am excited about: Alsarah and the Nubatones, Calvin and Hobbes, Motown, "Dreamgirls," (so, more Motown, I guess), Nubian Skin, American AUTO (so, uh.... *more* Motown, in a sense??), and Black Girls Code.
Had I clued this puzzle a month later, the spanner would have been clued as [Setting of "The Big Leap"]. Go watch "The Big Leap," everyone!!
Here is some suggested listening.
Things I learned:
Random thoughts and interesting things:

Today the puzzle's title let me know just what to expect, and the theme delivered. Moving from left to right in the grid, the MIC DROPs through a delightful set of theme answers. This puzzle is asymmetric, but only by one black square - the kind of asymmetry that subtly allows for smoother fill. In addition to the answers I've already highlighted, I enjoyed the theme answer of DYNAMIC DUO, as well as PACKRAT, IF I MAY, and HOW IS IT. This puzzle was a delightful way to begin my Thursday.
Malaika Handa