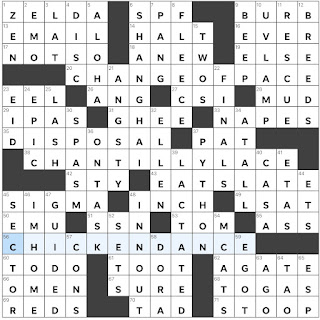 Theme Answers:
CHANGE OF PACE (20A: Switch-up)
CHANTILLY LACE (38A: Fine French fabric)
CHICKEN DANCE (56A: Choreography involving "wings")
Theme synopsis: Each theme answer is found within the word CHANCE.
And now a word from our constructors:
Matthew & Amanda: We’re so excited to finally share this first-ever 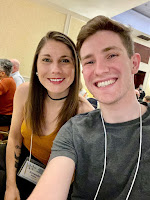 Amanda/Matthew collaboration! This theme set of 12/13/12 was pretty constraining when we were laying out the puzzle, but we loved working together to get it in such good shape. Since finishing this puzzle, we also got to meet in person at the American Crossword Puzzle Tournament a few weeks ago! We can’t wait for next year’s tournament and any puzzles from the two of us in the meantime :)
Things I learned:
Random thoughts and interesting things:

I am IN LUCK to be able to solve and blog about such a fun puzzle today! Three solid theme answers are just the beginning; there's so much to like about this puzzle. A lot of enjoyable clues today, including RESCUE (11D: "Buzz Lightyear to the ___!"), NOT SO (17A: "Au contraire!"), and TOOT (61A: Tugboat sound). In addition to the answers I've already highlighted, I especially liked FLEECE, LACTATED, and I'M HOME. I look forward to more Amanda & Matthew collaborations. This puzzle was a delightful way to begin my Sunday.