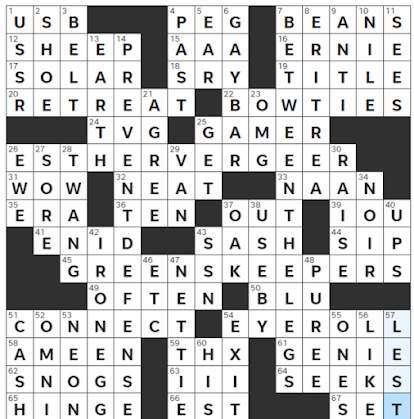 ESTHER VERGEER (26A: Pro tennis player with a career singles record of 695-25)

BETWEEN THE LEGS (7D: Like some dribbles and dunks)

Theme synopsis: All answers are sports-related terms that contain only Es as their vowels, thus the title "E-Sports."

Hi readers! I'm Shannon Rapp, and I'm back with my third guest blog for Sally's Take today. I loved reviewing yet another fun puzzle from Erik! While all four sports themed answers were unfamiliar to me, they were each a delight to uncover. I was about halfway through my solve when I realized that each theme answer was only going to contain Es, and I was impressed by the answers chosen for the marquee entries to build this puzzle. Very happy to learn about Esther Vergeer especially. Erik, thanks for the fun solve!

I'm wrapping up three consecutive posts from the STL crossword crew - please see Matthew's and Sid's posts too. What a fun coincidence! I also wrote today's Lil AVC X puzzle that I think is super fun and I'd love for you to try it and let me know how it goes for you.

Sally, thanks for letting me fill in today, and enjoy your day off!

Readers, please consider supporting Sally's Take if you are able. (See the yellow Donate button to the side or below)