Title: THAT WAS CLOSE! 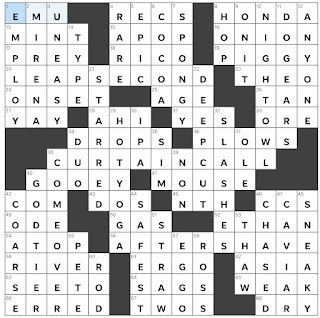 Theme Answers:
LEAP SECOND (20A: Tiny adjustment to Coordinated Universal Time)
CURTAIN CALL (38A: Time to take a bow)
AFTER SHAVE (56A: Soothing stuff at a barbershop)
Theme synopsis: The last word of each theme answer can follow the word CLOSE to form a new phrase, giving us: CLOSE SECOND, CLOSE CALL, and CLOSE SHAVE.
And now a word from our constructors:
Alina: Always an honor and pleasure to work with Brooke and Erik! I just looked back through this puzzle to highlight a few favorite clues, but I love 'em all! Maybe I'll go with 1-Across, because I learned about the constellation by reading the Wikipedia page for EMU, and then I went to a random astronomy lecture a few weeks ago, and heard about it again, as part of a discussion on the role astronomy plays in every culture's history!
Brooke: Working with Alina is a dream! I loved her NYT last August. And +1 that I adore all of our clues! I think I like Alina's 35D clue the best, and I also love 38D (so real).

Whew! THAT WAS CLOSE! The theme that is, the solve was silky smooth and enjoyable. A solid set of theme answers today. In addition to the answers highlighted above, I liked SPONGY, DEEP CUT, GOD TIER, and HOT YOGA. Many of today's clues made me smile, including SIM (35D: Computer game character that might be "Hot-Headed" or "Unflirty") and COME OVER (38D: "I want to see you but I don't want to leave my place"). This puzzle was a great way to begin my Tuesday.
Answer to Geography Quiz: In addition to Washington, Idaho, California, and Nevada also border OREgon.
Alina Abidi Brooke Husic