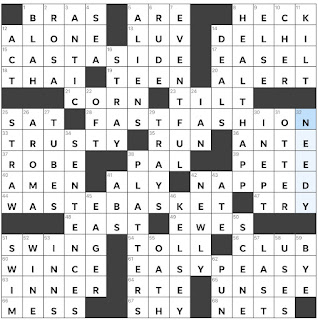 Theme Answers:
CAST ASIDE (15A: Discard)
FAST FASHION (28A: Inexpensive, trendy clothing industry)
WASTE BASKET (44A: Trash receptacle)
EASY PEASY (61A: "Piece of cake!")
Theme synopsis: The word AS is found hidden in both of the words of each theme answer, making the theme answers TWICE AS FUN.
Things I learned:
Random thoughts and interesting things:

A tricky theme, highlighting the two-letter word in the title. After I had two theme answers filled in - CAST ASIDE and FAST FASHION - I paused and stared at them, trying to figure out the theme. A nice "Aha!" moment AS I spotted it. I liked a lot of the clues today, though my favorite may be SENTENCES (34D: They're separated by periods). Well, I also liked the clue for PUN (62D: "Math is as easy as pi!" e.g.) I do enjoy a good PUN clue. This puzzle was an enjoyable way to begin my Tuesday.
Claire Rimkus