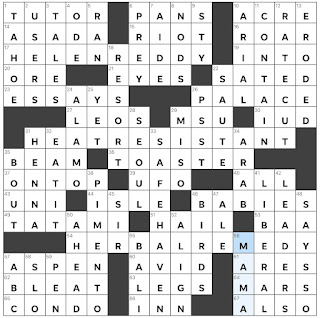 Theme Answers:
HELEN REDDY (17A: "I Am Woman" singer)
HEAT RESISTANT (31A: Like welding gloves)
HERBAL REMEDY (54A: Licorice root for a sore throat, for example)
Theme synopsis: In each theme answer, the first word begins with the letters HE-, and the second word begins with the letters RE-. Together the two words START with the word HERE.
Things I learned:
Random thoughts and interesting things:

An interesting variation on an initialism theme, with the first two letters of each theme answer word being featured. In addition to the theme, I enjoyed the answers SAFE HAVEN and PIMENTO, as well as the not-paired-by-clues, but adjacent LIBERAL LEADERS. This puzzle was an enjoyable way to begin my Sunday.
Zhouqin Burnikel