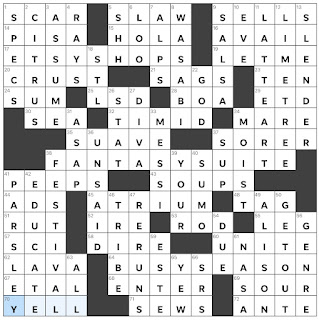 Theme Answers:
ETSY SHOPS (17A: Where some artists sell their goods online)
FANTASY SUITE (38A: Romantic room in "The Bachelorette)
BUSY SEASON (64A: Time of year with increased sales)
Theme synopsis: EMBEDDED in each theme answer is the abbreviation for SYSTEM (SYS).
Things I learned:
Random thoughts and interesting things:

Today's title let me know just what to expect theme-wise. Filling in ETSY SHOPS confirmed my guess. In addition to the theme, I enjoyed the upper right and lower left corners of the puzzle with columns of nice long down answers such as LATTE ART, LIME TREE, FESTIVAL, and EDUCATE. The clue for YELL (70A: TALK LIKE THIS) made me smile. This puzzle was a great way to begin my Wednesday.
Malaika Handa