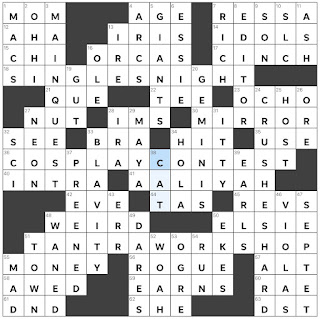 Theme Answers:
SINGLES NIGHT (18A: Evening event for romantic hopefuls)
COSPLAY CONTEST (36A: Competition where you might be graded on your Superbly costume)
TANTRA WORKSHOP (51A: Spiritual session involving intimate exercises)
Theme synopsis: Each theme answer begins with an abbreviation of a TRIGonometric FUNCTION. The leading TRIG FUNCTIONS are SIN (sine), COS (cosine), and TAN (tangent).
And now a word from our constructors:
Mikkel: Brooke and I have known each since 2010 after meeting during a fiction writing class, and since then our interests have diverged and converged with language in various ways, most recently converging in the form of crosswords. After she explained her journey with solving and construction and expressed an interest in collaboration, all it took was finding a good anchor (or rather seed) to start with.
Flashback to January 7th's USAT puzzle Power Series, I mused how I thought power series theme meant that there was gonna be some mathematical functions involved, and then after some back and forth over how to get a coherent theme for Trig Functions, Brooke was kind enough to grid and help guide me 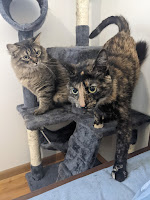 through my first USAT cluing experience. And I was more than happy to inject some references to some of my favorite video games amongst other things.
Brooke: I'm beyond happy to have co-created this with my very dear friend Mikkel -- it feels like a natural extension of all the writing we've done together since we met in college. I love his cluing angles for 1A/9D, 18A, 30A, 36A, 41A, and 50A especially, and I'm glad we got to show some appreciation to his CATs and we're also happy to shout out some friends over at BLAVITY. For another Mikkel puzzle (that also mentions Destiny 2), see here :)
Things I learned:
Random thoughts and interesting things:

Today's puzzle has a fun math theme that does not require a solver to enjoy math (though I do) to be successful. In addition to the theme answers, MAIN QUEST was a nice bonus entry. CRUSHES HARD is not a phrase I've encountered, but it was inferable. Although I'm not a gamer, I love people that are, so I've picked up some gaming knowledge through the years. I feel like this puzzle added to my knowledge base in that area. Congratulations to Mikkel Snyder on the USA Today crossword debut! This puzzle was a delightful way to begin my Tuesday.
Brooke Husic Mikkel Snyder