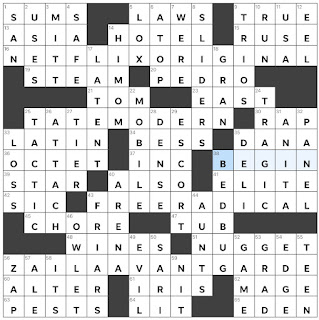 Theme Answers:
NETFLIX ORIGINAL (16A: "The Queen's Gambit," e.g.)
TATE MODERN (25A: London museum that opened in 2000)
FREE RADICAL (43A: Stable molecule with an unpaired valence electron)
ZAILA AVANT-GARDE (56A: Guinness World Record holder who won the 2021 Scripps National Spelling Bee)
Theme synopsis: The last word of each theme answer is a synonym for SOMETHING NEW: ORIGINAL, MODERN, RADICAL, and AVANT-GARDE.
Things I learned:
Random thoughts and interesting things:

And now for ...SOMETHING NEW. Let me BEGIN with today's theme answers; they were all great...you might say they were all "novel" in a way. There was a lot to enjoy in today's puzzle in addition to the theme. Shoutout to the delightful clue for HI MOM (14D: Mouthed greeting from the stands). I also liked the answers TACTIC and NUGGET. This puzzle was a fabulous way to begin my Thursday.