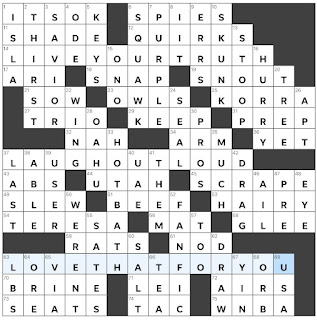 Theme Answers:
LIVE YOUR TRUTH (14A: "Don't hide from the world!")
LAUGH OUT LOUD (37A: Chuckle audibly)
LOVE THAT FOR YOU (63A: "I completely support that decision!")
Theme synopsis: The TIPS (starting words) of the theme answers combine to form a MOTIVATIONAL phrase: LIVE, LAUGH, LOVE.
And now a word from our constructors:
Mark: I just love collaborating with Brooke, and she always helps me find new ways into thinking about themes. We worked backwards from me wanting to use the answer to 63-Across and ended up referencing the three-worded phrase that lives on rustic wooden plaques in calligraphy across the country.
Brooke: It was an absolute joy to collaborate with Mark on this puzzle, which we designed around 63-Across. I *love* the theme we came up with to fit it in a puzzle, and I adore our grid! My favorite of Mark's clues are 34A, 53A, and 42D.🔥🔥🔥
Things I learned:
Random thoughts and interesting things:

This is a fun puzzle; I even found it...MOTIVATIONAL. Did you know that the MOTIVATIONAL phrase, LIVE, LAUGH, LOVE has its own Wikipedia page? This phrase became popular in the late 2000s and early 2010s, and as Mark mentioned in his notes, can be found on many plaques, and also on mugs, t-shirts, and throw pillows. The phrase is an abridged form of a 1904 poem, "Success" by Bessie Stanley, that begins, "He achieved success who has lived well, laughed often, and loved much." As sometimes happens with things that become popular, the phrase LIVE, LAUGH, LOVE became so ubiquitous that its original MOTIVATIONAL impact is now viewed by some as a generic, shallow motto. Whether you're a fan of the saying or not, you can be a fan of this puzzle; there's so much to enjoy here! I really like the answer SQUAWK, and give it bonus points for crossing OWLS since it's clued as a [harsh bird sound]. I also liked the answer QUIRKS (12A: Personal idiosyncrasies); we all have them. This puzzle was a delightful way to begin my Tuesday.
Answer to Geography Review Quiz: The states whose boundaries meet at Four Corners are: UTAH, Colorado, New Mexico, and Arizona.
Brooke Husic Mark Valdez