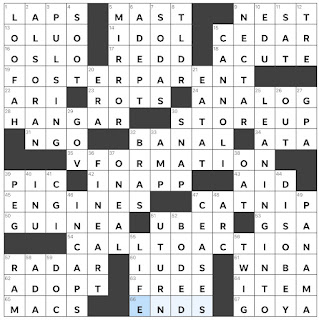 Theme Answers:
FOSTER PARENT (19A: Victor or Rosa Vasquez, to Billy Batson)
V FORMATION (35A: Flying geese travel in one)
CALL TO ACTION (54A: "Share this post," for example)
Theme synopsis: The word on the RIGHT in each theme answer can be preceded by the word TRANS, giving us TRANSPARENT, TRANSFORMATION, and TRANSACTION.
And now a word from our constructor:
Ada: I'm so excited to have my first USA Today puzzle published, especially with a theme so near and dear to my heart <3. If you're a trans person reading this who likes crossword puzzles and wants to be mutuals, find me on Twitter at @adanicklmao! Also, I have more (mostly themeless) puzzles on my blog Luckystreak Xwords (luckyxwords.blogspot.com) and my Patreon (patreon.com/luckyxwords).
Lastly, thank you to Erik Agard and Brooke Husic for the guidance! This puzzle couldn't have happened without them.
Things I learned:
Random thoughts and interesting things:

Oftentimes when we see a title featuring a word paired with a direction, we find that particular word in the theme answers in a location indicated by the direction. Therefore, when I filled in FOSTER PARENT, I paused for a moment. I did not find TRANS to the RIGHT of the answer. A lovely "Aha!" as the theme clicked - became TRANSPARENT, one could say. Three great theme answers with fabulous TRANSFORMATIONs. Congratulations and welcome to ADA Nicolle, who is making her USA Today debut with this puzzle! I know of ADA's work from other spheres of the crossword world, and when I saw her name as constructor of today's puzzle, I knew I was in for a treat. It was as delightful as I expected; a fabulous way to begin my Monday.
TL;DR: Delightful puzzle!
Ada Nicolle