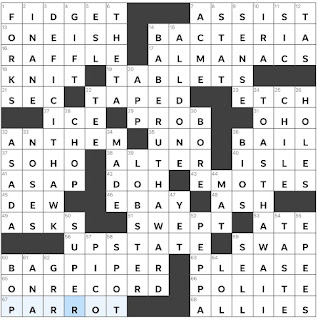 When the hidden word in the theme answers is hinted at, but not explicitly stated, in the puzzle's title, there's a nice "OHO!" (31A: "Well, whaddya know!") moment when the word is discovered. Since many of Zhouqin Burnikel's recent puzzle have had asymmetrical grids, I noticed the rotational symmetry today. The grid shape is interesting, and results in enjoyable answers in each corner: FIDGET, ONEISH, BACTERIA, ALMANACS, BAGPIPER, ON RECORD, PARROT, PLEASE, and POLITE. This puzzle was a fine way to begin my Sunday.
Zhouqin Burnikel