Title: IN A NUTSHELL 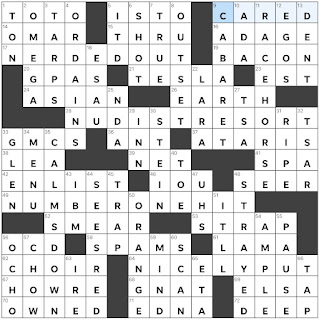 Theme Answers:
NERDED OUT (17A: Had a passionate discussion about numbers, e.g.)
NUDIST RESORT (28A: Place for a vacation in the buff)
NUMBER ONE HIT (49A: Chart-topper)
NICELY PUT (64A: "Well said!")
Theme synopsis: Each theme answer is IN A NUTSHELL, in the sense that the letters of the word NUT appear at the outside edges of the answers.
Things I learned:
Random thoughts and interesting things:
A classic USA Today theme today, executed with a fine set of theme answers. I enjoyed the cluing a lot today. Some examples: NERDED OUT (17A: Had a passionate discussion about numbers, e.g.), HOW'RE (67A: Contraction that rhymes with "sour"), and TON (1D: Unit of weight for a brachiosaurus). This puzzle was a satisfying way to begin my Saturday.
Christina Iverson