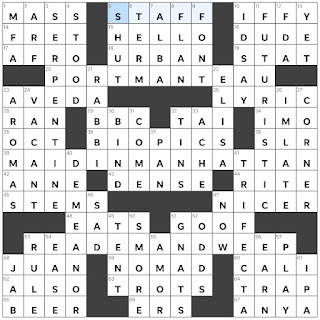 Theme Answers:
PORTMANTEAU (20A: "Frenemy" or "frankenfood")
MAID IN MANHATTAN (39A: Jennifer Lopez rom-com set in a posh New York hotel)
READ EM AND WEEP (53A: Phrase said while revealing a royal flush)
Theme synopsis: The word MAN is found in the exact MIDDLE of each theme answer.
Things I learned:
Random thoughts and interesting things:

Not only is MAN in the MIDDLE of each theme answer, the use of left-right mirror symmetry results in MAN being in the exact MIDDLE of the puzzle in each row in which it appears. There's so much to enjoy here. In addition to the answers I've already highlighted, SERPENTINE and DEMEANOR are great long bonuses. The puzzle gives shoutouts to my birth state (CALI) and my current state (Iowa). Had it included a reference to my growing-up-state (Missouri), it would have achieved a TRIFECTA. I especially enjoyed the clues for READ 'EM AND WEEP, and, of course, STAFF. This puzzle was a delightful way to begin my Monday.
Enrique Henestroza Anguiano