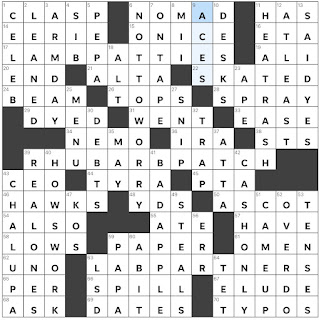 Theme Answers:
LAMB PATTIES (17A: Some koftas)
RHUBARB PATCH (39A: Place where a vegetable with tart stalks grows)
LAB PARTNERS (63A: Chemistry class collaborators)
Theme synopsis: HIDDEN in each theme answer we find the letters BPA, an ADDITIVE used in the manufacture of some plastics.
Things I learned:
Random thoughts and interesting things:
BPA, or bisphenol A, is an ADDITIVE used in the production of plastics. There are no BPA labeling requirements for plastics, so it difficult to determine which plastics contain this HIDDEN ADDITIVE. It is easier to find BPA in this puzzle, where it is only slightly HIDDEN in the theme answers. This puzzle played on the challenging side for me, but I stuck with it and was successful; an enjoyable start to my Sunday.
Zhouqin Burnikel