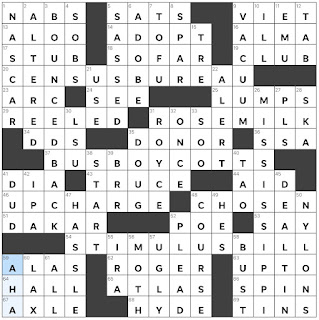 Theme Answers:
CENSUS BUREAU (20A: Agency whose data determines a state's representative count)
BUS BOYCOTTS (37A: Civil rights campaigns in Montgomery (1955-56) and Tallahassee (1956))
STIMULUS BILL (54A: Piece of legislation intended to spur the economy)
Theme synopsis: The two words of each theme answer have a USB CONNECTION.
Things I learned:
Random thoughts and interesting things:

Unlike my real-life experience with USB CONNECTIONs, I managed to get the USB placed correctly in each theme answer on the first try! A delightful theme today with a solid and interesting set of theme answers. The long vertical answers of BOUNCED BACK and MISSISSIPPI are delightful bonuses. I laughed at the great clue for VACUUM (9D: Sucky appliance). This puzzle was an enjoyable way to begin my Thursday.
Emily Sharp Kunal Nabar