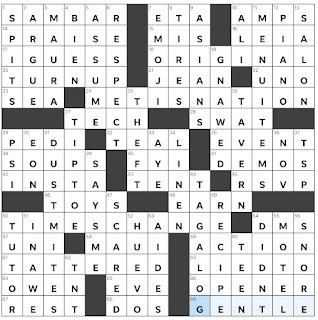 Theme Answers:
METIS NATION (24A: Group with governments in Ontario and British Columbia)
TIMES CHANGE (50A: "That was then and this is now")
MENU ITEMS (11D: Options for ordering)
DUST MITES (31D: Some household allergens)
Theme synopsis: Each theme answer features an ADAPTATION of the letter string E-I-M-S-T: METIS, TIMES, ITEMS, and MITES.
Things I learned:
Random thoughts and interesting things:

This is a fun anagram theme. Since the anagrams appear at either the beginning or end of the theme answers, I liked the choice of putting the beginning anagrams horizontally, and the ending anagrams vertically to differentiate. As mentioned above, the theme answer/revealer TIMES CHANGE delighted me when I uncovered it. This puzzle was a bit more of a challenging solve for me than usual, but it was a GENTLE challenge, and an enjoyable way to begin my Saturday.
Erik Agard