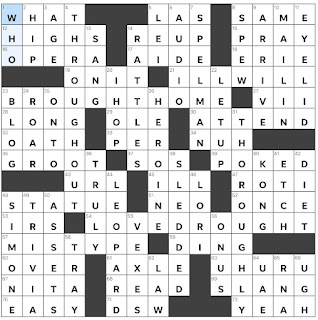 Theme Answers:
BROUGHT HOME (23A: Made totally clear)
LOVE DROUGHT (54A: Beyonce song with the lyric "You and me could make it rain now")
THROUGHOUT (4D: The whole time)
THOROUGHLY (31D: Without missing anything)
Theme synopsis: This puzzle has four ROUGH PATCHES in the sense that each theme answer contains the word ROUGH.
Things I learned:
Random thoughts and interesting things:

YEAH, I'm not usually a fan of ROUGH PATCHES, but as a crossword theme these particular ROUGH PATCHES did not make me say UGH at all. It's been a bit since we've seen the theme answers split with two across and two down answers. I like the visual of the four theme answers (two intersecting pairs) forming a square. In the center of that square we have an appropriately placed SOS (37A: Letters of distress). Never fear, though, also in that square, and crossing SOS, we have a HEROINE ready to THOROUGHLY help us THROUGHOUT our ROUGH PATCHES. (Perhaps this ILL WILL was BROUGHT HOME by a LOVE DROUGHT?) In spite of its theme, this puzzle was a smooth and enjoyable way to start my Thursday.
Erik Agard