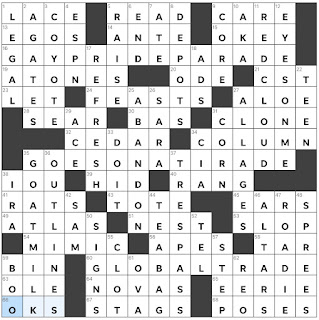 Theme Answers:
GAY PRIDE PARADE (16A: March with many rainbow flags)
GOES ON A TIRADE (35A: Indulges in a long rant)
GLOBAL TRADE (60A: International commerce)
Theme synopsis: Each theme answer's SCORE - in the form of a GRADE - is found at the OUTside edges.
Things I learned:
Random thoughts and interesting things:

My favorite answer today was EYES ON ME (12D: "Look this way"). Having spent some time working with children, I have uttered this phrase a time or two. This puzzle was an enjoyable way to begin my Wednesday.
Zhouqin Burnikel