Title: OUT WITH THE OLD, IN WITH THE NEW 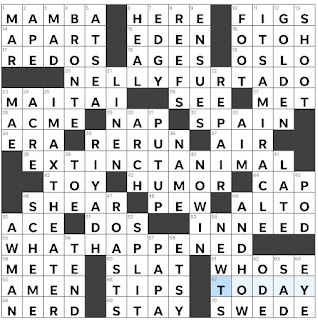 Theme Answers:
NELLY FURTADO (20A: "I'm Like a Bird" singer)
EXTINCT ANIMAL (38A: Woolly mammoth or dodo, e.g.)
WHAT HAPPENED (55A: "Can you catch me up?")
Theme synopsis: The last letters of the theme answers in order, spell the word OLD, and the first letters spell the word NEW.
Random thoughts and interesting things:

It took me a few moments of looking at the completed puzzle to figure out today's theme. Such a lovely "Aha!" moment when I saw it. I enjoyed this creative and timely theme today. David Steinberg is the editor of the Universal crossword puzzle, and it's always a treat to see his name as constructor. IT'S A MIRACLE and IMAX THEATER were great bonuses today. This puzzle was an enjoyable way to begin my Friday and the last day of 2021. I will see you next year!
David Steinberg