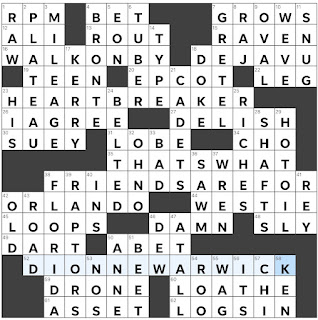 Theme Answers:
WALK ON BY (16A: Pass without saying hi)
DÉJÀ VU (18A: Feeling that's French for "already seen")
HEARTBREAKER (23A: Overtime loss in the playoffs, for example)
THAT'S WHAT FRIENDS ARE FOR (35A: With 38-Across, "You know I got you!") and (38A: See 35-Across)
DIONNE WARWICK (52A: Singer with song titles at 16-, 18-, 23- and 35-/38-Across)
Theme synopsis: Our TITLE SEARCH for DIONNE WARWICK songs uncovered "WALK ON BY," "DÉJÀ VU," "HEARTBREAKER," and "THAT'S WHAT FRIENDS ARE FOR."
Things I learned:
Random thoughts and interesting things:
Geography review:
I thoroughly enjoyed this tribute puzzle to DIONNE WARWICK! It was fun to see the song titles given straight clues. I figured out what was happening as soon as I filled in WALK ON BY for [Pass without saying hi]. My favorite clue was ["You know I got you!"] I appreciate that the songs appear in chronological order in the puzzle. I don't know if that's intentional, or a happy coincidence, but it's elegant. For me, this puzzle highlights an advantage to being open to using asymmetrical grids. The theme answers here are 8-, 6-, 12-, 9-/13-, and 13- answers long; a set that might be impossible to accomplish in a symmetrical grid, particularly maintaining the theme order. I will probably be singing DIONNE WARWICK songs all day, and that's not a bad thing. This delightful puzzle was a perfect way to begin my Thursday.
Erik Agard