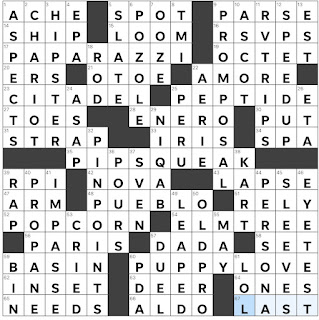 Theme Answers:
PAPARAZZI (17A: Celebrity photographers)
PEPTIDE (25A: Chain of amino acids)
PIPSQUEAK (35A: Little twerp)
POPCORN (52A: Movie theater snack)
PUPPY LOVE (60A: Early feelings of affection)
Theme synopsis: Each theme answer begins with the letter pattern P_P, and the blank is filled, in order moving through the puzzle, with the vowels A, E, I, O, and U.
Things I learned:
Random thoughts and interesting things:

I'll admit I was not familiar with the term P2P, and had to look up what it is. P2P stands for peer-to-peer, and is a type of computing or networking architecture. Fortunately, I didn't need to know anything about that to enjoy today's puzzle! This is a fun letter pattern theme, and I really appreciated the elegance of the vowels appearing in order. Also, the P_P part of each word is a stand-alone word in each case: PAP, PEP, PIP, POP, PUP. There are some nice long downs in the corners of the puzzle: CHARIOT, HIPSTER, PERSONA, IMPASSE, and SPEED UP. This puzzle was a delightful way to begin my Friday.
Rebecca Goldstein