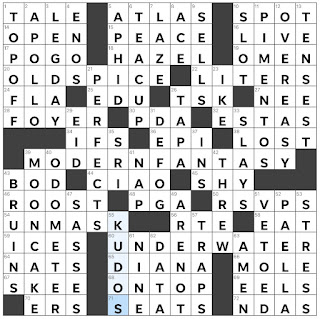 Theme Answers:
OLD SPICE (20A: Deodorant brand with many absurd ads)
MODERN FANTASY (39A: Genre with magical elements in present-day settings)
UNDERWATER (60A: Submerged)
Theme synopsis: Each half of the theme answers can precede the word WORLD, giving us OLD WORLD, SPICE WORLD, MODERN WORLD, FANTASY WORLD, UNDERWORLD, and WATER WORLD.
And now a word from our constructors:
Kim: This theme was in crossword limbo for months while I struggled to come up with a set where each half was a valid, well-known, unproblematic phrase that didn't necessarily just stand in for "sphere of the preceding noun." So things like FREE SPIRIT, DREAM HOME, and DJ Khaled's favorite ANOTHER ONE all found their way to the dust bin. But! This is a great advertisement for the power of collabs and what a fresh, smart pair of eyes can do. I ran this one by Kate who produced some real cool stuff like OPEN SECRET and MISS PERFECT, before we settled on the final three asym themers here. As for the grid, once we needed to go asym for theme, it was nice to also be able to squeeze in some things that make you know it's a real Kim/Kate collab (come for the food words, stay for the Kate clues at 18-A or 54-A, revel in our combined glee at 39-D).
Kate: This was such a great theme to work on, because it involved thinking up a lot of fun phrases, most of which were colorful and evocative. Granted, though, like Kim said, it ended up being tough to settle on the right ones! The fact that SPICE World is a tangential part of this puzzle is, I believe, objectively delightful; I'm not sure how many solvers will be independently familiar with the MODERN FANTASY lit genre, but it's worth checking out if you like a good page-turner but aren't really into, say, medieval social conventions. And aside from the theme, I love Kim's asym grid, and we were both really happy with the fill (Kim mentioned it as well, but here's my verbatim response when he sent me the SE corner: "MOONCAKE!!!")
Things I learned:
Random thoughts and interesting things:

I, for one, am happy to see these WORLDS COLLIDE in this puzzle, as it made for an enjoyable solve. A nice set of 8-, 13-, and 10- letter theme answers that necessitated an asymmetric grid. In addition to the theme answers, there's a ton of great fill; in addition to those answers highlighted above, shoutouts to OVER EASY, ODOMETER, SASSES, and LEG DAY. The cluing is lovely as well. I particularly enjoyed the clues for HAZEL (18A: Like greenish, brownish, goldfish eyes), ROOST (46A: What chickens come home to do), and UNMASK (54A: Expose like a Scooby-Doo villain). This puzzle was a delightful way to begin my Tuesday.
Answers to geography quiz: The capital of Florida is Tallahassee. The capital of Georgia is Atlanta. SRI Lanka has two capitals. The legislative capital of SRI Lanka is SRI Jayawardenepura Kotte, and the executive and judicial capital is Colombo.
Hoang-Kim Vu Kate Chin Park