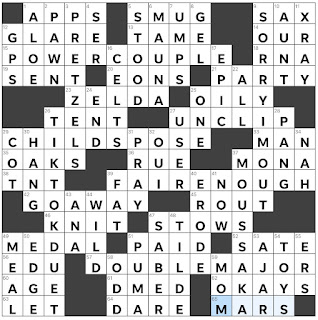 Theme Answers:
POWER COUPLE (15A: Pair who might exemplify #relationshipgoals)
CHILD'S POSE (29A: Asana used for resting)
FAIR ENOUGH (39A: "I see your point")
DOUBLE MAJOR (57A: College degree with two specializations)
Theme synopsis: The first word of each theme answer can precede the word PLAY to create a new phrase. We have a POWER PLAY, CHILD'S PLAY, FAIR PLAY, and a DOUBLE PLAY.
And now a word from our constructors:
Brandon & Brooke: We're so excited that this puzzle is out in the world! We were happy to find the two long answers TIKTOK DUET and SORRY I'M OUT, and we like the foodie vibe with the symmetric PRETZELS + MOUSSAKA. Our favorite clues are for GO AWAY, MEDAL, LET (a bop), and MARS (also a bop).
Things I learned:
Random thoughts and interesting things:

Well, this is a PLAYful and PLAY-full puzzle. A nice set of solid theme answers. In addition to the answers I've already highlighted, I enjoyed SORRY I'M OUT and TIKTOK DUET. I also liked the PLAYful clue for GO AWAY (42A: Warning taped to a pillow fort.) Congratulations and welcome to Brandon making their USA Today debut today! This puzzle was a great way to begin my Monday.
Brandon Brooke Husic