Title: BREAKING IT DOWN 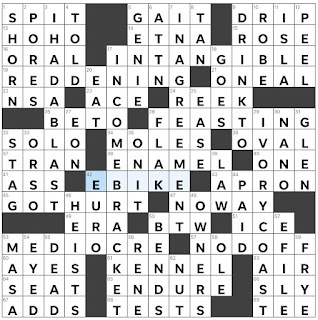 Theme Answers:
I HAD A BLAST (3D: "That was fun!")
IN AGREEMENT (7D: On the same page)
INCOME BRACKET (17D: Tax rate determinant)
IVORY COAST (29D: Country where Kedjenou is eaten)
Theme synopsis: Each vertical (DOWN) theme answer is BREAKING the word IT, with the I- appearing at the beginning of the phrase, and the -T at the end.
Things I learned:
Random thoughts and interesting things:
Geography review:
This puzzle is BREAKING IT DOWN...literally. My favorite theme answer, appropriately, is I HAD A BLAST. Are we IN AGREEMENT about this? In NO WAY did I find this puzzle MEDIOCRE, nor did I NOD OFF while solving it, though I did enjoy those answers, along with INTANGIBLE. This puzzle is asymmetrical, allowing the center two theme answers to be unmatched in length. This puzzle was an enjoyable way to begin my Tuesday.
Rafael Musa