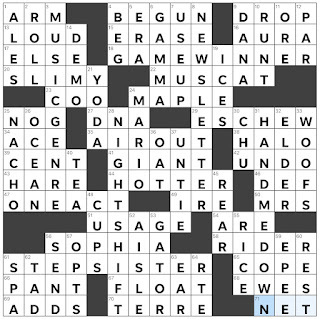 Theme Answers:
MUSIC GENRE (3D: Rap or riot grrrl, for example)
NEWSLETTER (8D: Small publication)
NIGHT SHIFT (28D: After-hours work schedule)
HAND-ME-DOWN (31D: Article of clothing passed on from someone else)
Theme synopsis: The first part of each vertical (TALL) theme answer can precede the word STAND. We have a MUSIC STAND, a NEWS STAND, a NIGHT STAND, and a HANDstand.
Things I learned:
Random thoughts and interesting things:
Geography review:
It's a TALL order to produce enjoyable themed puzzles daily, but this puzzle can STAND TALL - it is up to the task. Four solid theme answers here hinting at a variety of STANDs. HAND-ME-DOWN is my favorite theme answer, and the resulting HANDstand is my favorite of the produced phrases. I also enjoyed the answers GAME WINNER, SLIMY, STEPSISTER, and WOOFS. This puzzle was a great way to begin my Friday.
Claire Rimkus