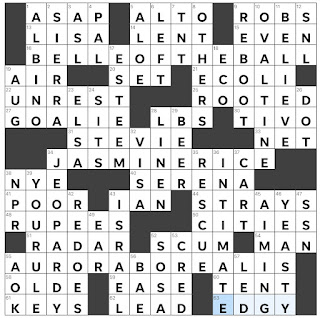 Theme Answers:
BELLE OF THE BALL (16A: Most fashionable woman at an event)
JASMINE RICE (34A: Thai curry side dish)
AURORA BOREALIS (55A: Northern Lights)
Theme synopsis: The BEGINNING of each theme answer is the name of a DISNEY PRINCESS.
And now a word from our constructor:
Malaika: I've had this collection of theme answers sitting around for about a year now, but couldn't think of a good title or revealer. Parker came up with this one, and I think it is absolutely perfect. This puzzle reminds me of when Joon gave a summary of a meta puzzle that I wrote. He commented that I had four clues that referenced princesses, and wondered if that had something to do with the theme. (In that case it didn't! I just like princesses!!)
I'm glad I got to shout out Cora Harrington's book in the clue for 36-down! She's a blogger, although I read her Tweets more than her blog. They are so insightful and well-researched, with beautiful photographs.
Things I learned:
Random thoughts and interesting things:
Geography review:
A fun straightforward theme today. In addition to the theme answers and other answers I've already highlighted, I enjoyed YEASTY, OVALTINE, and BELIEVE. This puzzle is asymmetric by one square (or two depending how you want to count it), the black square separating the answers PAL and SITS. I'm guessing this square was used to facilitate smooth fill, and as I've mentioned before, I'll always be a fan of that plan. This puzzle is fit for a PRINCESS, and was a delightful way to begin my Tuesday.
Malaika Handa