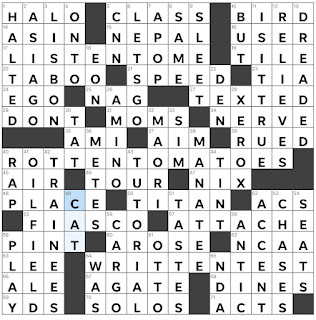 Theme Answers:
LISTEN TO ME (17A: "Pay close attention!")
ROTTEN TOMATOES (40A: Movie and TV review website)
WRITTEN TEST (64A: Driver's license requirement)
Theme synopsis: Each theme answer has the word TENT IN it, spanning the two words in the answer.
Things I learned:
Random thoughts and interesting things:

Each day when I see the puzzle's title, I try to guess what the theme of the puzzle will be. Today's title led me to guessing the exact opposite of what the theme turned out to be. My guess was that the theme answers would be contained within the word TENT. However, LISTEN TO ME appropriately clued me in to the fact that TENT was found INside the answers. This is another asymmetrical grid from Zhouqin Burnikel. In addition to the answers highlighted above, I enjoyed LET'S GO, IS IT TRUE, and PLAY. This puzzle was a great way to begin my Sunday.
Zhouqin Burnikel