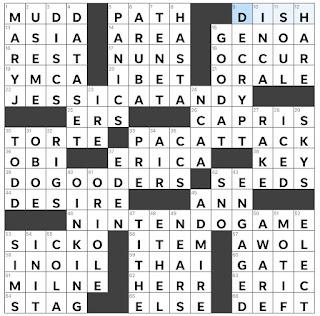 Theme Answers:
JESSICA TANDY (22A: She played Ninny Threadgoode in "Fried Green Tomatoes")
PAC-ATTACK (33A: Rhyming Tetris-like game in which blocks and ghosts are cleared)
DO GOODERS (39A: Naive philanthropists)
NINTENDO GAME (46A: Animal Crossing or Metroid, e.g.)
Theme synopsis: Each theme answer has (RETAINs) either the word CAT or DOG, spanning the two words of the answer.
Things I learned:
Random thoughts and interesting things:
Geography review:
The title of this puzzle is fabulous, playing on the idiom "raining CATS AND DOGS." You know Willow 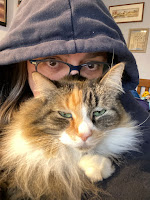 enjoyed this puzzle, though she is more a fan of the top half of the puzzle than the lower half. The grid arrangement here is unusual, in that all four theme answers are found (RETAINED perhaps?) in the middle section of the puzzle. In addition to the theme answers, I enjoyed OINKING (this answer actually made me laugh out loud), DECRYPT, PANICS, and MOTIF. I also liked the clue for SEEDS (42A: Plants-to-be). There's a lot of game content here, with the NINTENDO GAMES, Animal Crossing and Metroid, PAC ATTACK, The SIMS, and the board game Ankh: Gods of Egypt. This puzzle was an enjoyable game with which to begin my Saturday.
Patrick Blindauer