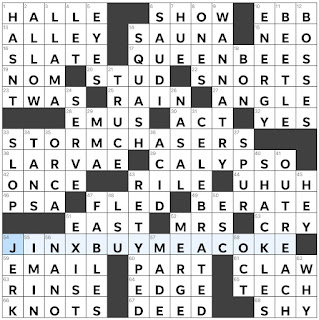 Theme Answers:
HALLE (1A: ___ Berry, actress with roles found at the starts of three answers in this puzzle)
QUEEN BEES (17A: Hive leaders)
STORM CHASERS (33A: People who pursue severe weather)
JINX BUY ME A COKE (54A: Phrase that might send someone to the vending machine)
Theme synopsis: This puzzle is a STUDY of CHARACTERs played by HALLE Berry: QUEEN, STORM, and JINX.
Things I learned:
Random thoughts and interesting things:
Geography review:
What a fun puzzle! It's rare for USA Today puzzles to feature revealers, and rare overall for a revealer to be the first answer in a crossword. We see both of those things today, as the first answer in the puzzle reveals that this crossword is a CHARACTER STUDY of HALLE Berry. Some people don't like tribute puzzles. I am not in that group of "some people," particularly when the puzzle is as enjoyable as this one, and the subject is as tribute-worthy as HALLE Berry. I enjoyed finding the bonus theme material that Erik Agard is so skillful at incorporating into the puzzles he constructs. If you discover any bonus theme content I've missed, please let me know. This grid is asymmetrical, to accommodate theme answers of the lengths 9-, 12-, and 14-letters. This puzzle was a delightful way to begin my Tuesday.
Erik Agard