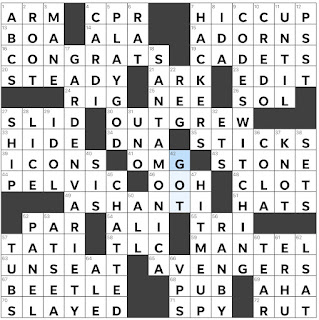 Theme Answers:
CODE SWITCHING (9D: Modulating between dialects)
GARDEN VARIETY (17D: Regular, degular, shmegular)
SANTA MONICA (18D: Beachfront city near Los Angeles)
Theme synopsis: The TOP word of each vertical theme answer can follow the word SECRET to form a new phrase. Our TOP SECRET new phrases are SECRET CODE, SECRET GARDEN, and SECRET SANTA.
And now a word from our constructor:
Erica: I thought it would be fun to use this puzzle to walk through my constructing processes. Actually, just the theme creation and grid filling because if I included cluing, this would be just way too long for anyone to read. (Okay, it’s still long, but perhaps insightful/helpful especially for beginning constructors?)
The theme came to me pretty quickly. I was thinking about Malaika Handa’s Diary of a Crossword Fiend review of a previous puzzle of mine. She mentioned that she liked it better when the title gives you some indication of where the word play takes place in a theme. The title she was commenting on was “Perfect Match”, which doesn’t point to where you’d find perfect’s match. I thought to myself, “hey, I actually agree with that”, so I was brainstorming around location words for a while and hit on the phrase “Top Secret”. I liked the idea of having vertical themers, I like the 1984 satire film, and when I came up with GARDEN VARIETY and CODE SWITCHING as two 13-letter themers, I was pretty into their zing, and I knew I wanted to clue GARDEN VARIETY as “regular, degular, schmegular”. I came up with SANTA MONICA next, and loved the fact that SANTA had such a different meaning in both phrases (Secret Santa vs. Santa Monica; this is true of the other themers, too, in some sense, which I always try for, but it hits stronger here).
When I first pitched the idea to Erik, the fourth themer to match SANTA MONICA was SERVICE DOGS. He nixed the secret service reference (as stated in the guidelines, the USA Today puzzles steer away from political/policing references). We agreed that “secret agent” was an okay phrase, as they’re more associated with government than law enforcement, and it allowed me to put AGENT COOPER in as a fourth themer. I loved this reference to one of my favorite shows, Twin Peaks!
With the theme all set and editor-approved, I played around with the grid shape with the help of the Cruciverb website, which allowed me to see what others had done with 11-, 13-, 13-, 11- length themers (go to Puzzle Database, then Find Grids; note that this requires a subscription). I realized that L-shapes were pretty much necessary on the top and bottom. I had many false, unfillable-to-my-standards, starts including:

I remember loving SAD SACK and the center on WOK, and I didn’t love IM A PC, but thought it was fine. I ended up sending in this grid: 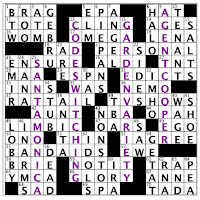 I loved getting Gebru in there, and also liked RAT TAIL because I had one when I was three (!!), but I remember this being a pretty gnarly/constrained filling process that I was kind of meh on. Erik pointed out the LIMBIC/IN ARMS crossing would be tough (I was planning on cluing IN ARMS as a reference to “babe in arms” because I try to avoid military references in all my puzzles), and that the ALDI/EDICTS/IMHO/AGENT COOPER area was sticky. Back to the drawing board!
I tried many other versions of this grid, resulting in some interesting back-and-forths with Erik about, for example, CROONER and whether that’s in the language anymore. I also had HONES IN somewhere, and Erik mentioned that the “proper” entry would be HOMES IN. I am a big believer in language being descriptive not prescriptive, so I was more than fine with HONES (Erik agreed on this), but the other issue that he pointed out is that parsing the phrase in the grid would be a bit tricky for a newbie solver. So true. I’ll save that phrase for another venue and ward off all you prescriptive language people another time! I loved this grid-editing process because it made me think in new ways about some words/phrases, and Erik is really good about explaining his editorial thoughts, while also allowing you to make your case/keep your voice.
Anyway, after all that, I eventually realized that AGENT COOPER had to go to give me more degrees of freedom with the non-themer fill. Sorry, all you other Twin Peaks fans!
Once I made that change, a pretty awesome grid came together really quickly. I was kicking myself for a bit because I had spent SO much effort trying to fit 4 themers in there. I wanted other Twin Peaks fans to get joy from that answer so badly! But, I quickly recovered because the final grid is great, too. It allowed me to use my favorite 4-letter fill, ERHU, and get CARDI in there as an easter egg for anyone who knew the GARDEN VARIETY clue reference. And, I love the reference to one of my other favorite TV shows, Star Trek, in 19A (CADET) as a way to get around real-word military references. I also love the key connecting longer entries PLAY GOD/HIT ME UP/ASHANTI/ OUTGREW.
That’s it! That’s my not-so-TOP-SECRET process. And, if anyone wants to co-construct a Twin Peaks-themed puzzle, you know where to find me! (It’s @ewojcik on Twitter. That’s where).
Things I learned:
Random thoughts and interesting things:
Geography review:
I'd like to discuss today's theme, but it appears to be TOP SECRET. (I couldn't resist.) A nice set of theme answers for this classic theme type. Erica definitely wins the award for the longest constructor notes I've received so far! Thanks to her for taking the time to provide insight to the constructing process for those who may be interested. This puzzle was an enjoyable start to my Tuesday.
Erica Hsiung Wojcik