Title: GO WITH THE FLOW 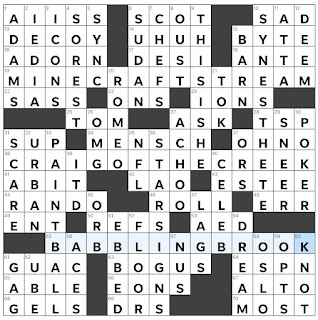 Theme Answers:
MINECRAFT STREAM (19A: Broadcast during which a pickaxe might be accidentally thrown into lava)
CRAIG OF THE CREEK (38A: Cartoon whose title character lives in Herkleton, Maryland)
BABBLING BROOK (55A: Part of a nature sounds playlist, perhaps)
Theme synopsis: The last word of each theme answer is a body of water that FLOWS: STREAM, CREEK, BROOK.
And now a word from our constructor:
Brooke: I had so much fun with this puzzle's grid and really wanted all the non-theme long stuff to be super fun given the flexibility of the (non-requisite! but ideally in the spirit of the title) asymmetry. I myself am a SYNESTHETE, but not a color/sound one! I also had a ton of fun cluing this, and I think Erik's clue for 19A is totally delightful.
Things I learned:
Random thoughts and interesting things:
Geography review:
As I write this, the view out of my window is of rain, so the STREAMs, CREEKs, and BROOKs will soon be FLOWing quite a bit, I'm sure. A lovely set of theme answers today. As Brooke mentioned in her notes, the grid pattern in this puzzle is asymmetrical. That is, it does not have the usual rotational, mirror, or diagonal symmetry usually seen in crossword grids. Although it wasn't the case for this puzzle, asymmetry can be useful if the theme answers are not of paired length. I enjoy asymmetry best when - as is the case in this puzzle - it's just slightly asymmetrical. You don't necessarily notice it while solving, and when you do it makes you think, "Wait, is this puzzle symmetrical or not?" Plenty of enjoyable answers today in addition to the theme. The always stilted sounding, "THIS IS HE," as well as SYNESTHETE, STAR SIGNS, PAINTBALL, MENSCH, and BOGUS. This puzzle was a great way to begin my Friday.
Brooke Husic