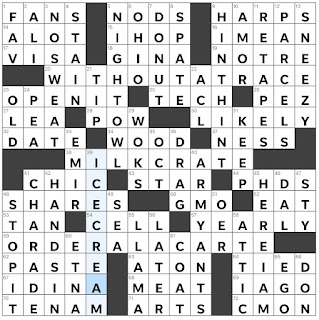 Theme Answers:
WITHOUT A TRACE (20A: Leaving no evidence behind)
MILK CRATE (38A: Stackable dairy container)
ORDER ALA CARTE (59A: Pick and choose from a menu)
Theme synopsis: The last word of each theme answer is an anagram of the word REACT. The words REACT, TRACE, CRATE, and CARTE each contain the same letters.
Things I learned:
Random thoughts and interesting things:
Geography review:
It's been a little while since we've seen an anagram theme, and this is a fun one. The title points perfectly at what is happening here, with the letters in the word REACT arranged DIFFERENTLY in each theme answer. The theme answer MILK CRATE reminded me of my college dorm decor, as these containers featured prominently. Some nice cluing today - I especially liked STAIN (4D: Blotch on a bib) and DRAG (36D: Word before "king" or "queen"). Non-theme answers that sparkled today were NIGHT OWL, NO SWEAT, SNEEZY, HERE I AM, and ICE CREAM. This puzzle was a great way to begin my Wednesday.
Zhouqin Burnikel