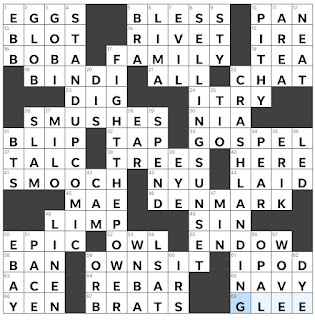 Theme Answers:
STAND-UP COMIC (4D: Professional joke-teller)
SELLING SUNSET (8D: Netflix series about a real estate firm in Los Angeles)
FIGHT THE POWER (17D: 1989 Public Enemy hit)
CRASH LANDING (22D: Pilot's emergency procedure)
Theme synopsis: The last word of each vertical theme answer can be placed before the word STRIP to form a new phrase. We have a COMIC STRIP, SUNSET STRIP, a POWER STRIP, and a LANDING STRIP.
Things I learned:
Random thoughts and interesting things:
Geography review:
This is fun version of a classic theme type to start off the week. I enjoyed all of the theme answers, as well as the collection of various STRIPs that were represented in the newly formed phrases. In addition to the theme answers, I especially liked SMOOCH and SMOOSHES. I also liked the collection of indeterminate shapes in the upper left portion of the puzzle, with BLOT, GLOB, and BLIP. Congratulations to Janet Strauss, who is making her USA Today crossword debut! [Edited to add: After I posted this, I discovered via Twitter that Janet is Kate's mom! How cool is that?! Fabulous puzzle from a mother/daughter duo.] This puzzle was a delightful way to begin my Monday.
Janet Strauss Kate Hawkins