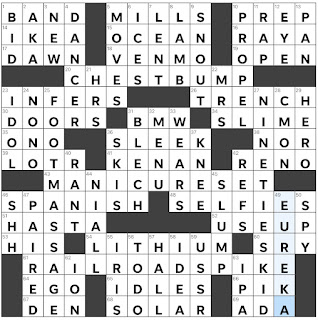 Theme Answers:
CHEST BUMP (20A: Colliding celebration)
MANICURE SET (43A: Kit with nail clippers)
RAILROAD SPIKE (61A: Piece of metal for train tracks)
Theme synopsis: The FINAL word of each theme answer is a VOLLEYBALL move, listed in the order they are often made: BUMP, SET, SPIKE.
And now a word from our constructor:
Malaika: Pre-Pandemic, volleyball was my main pastime. When indoor events started getting shut down, that time became filled with crosswords instead. So it feels nice to combine those two interests here. Many thanks to Brooke for coming up with the title for this one, and many thanks to Erik for allowing funky grid patterns that other publications might not-- I know those three blocks in the lower corners are kind of risque. I like how the arc in the center of this puzzle mimics the arc of a volleyball during a match.
Things I learned:
Random thoughts and interesting things:
Geography review:
Although I am not a big sports fan, for several years my husband and I have had season tickets to the University of Iowa women's VOLLEYBALL games. Such an athletic, fun sport to watch. I enjoyed the VOLLEYBALL theme of this puzzle, and especially appreciated that the terms were placed in the puzzle in the order they often occur in a game. This puzzle has left-right mirror symmetry; it is symmetrical along a vertical axis down the center of the puzzle. Mirror symmetry allows for theme answers of different lengths (9-, 11-, and 13- letters here). Malaika mentioned the collection of black squares in the center of the puzzle that resembles the arc of a volleyball. I think the inverted-T of black squares below that somewhat resembles a volleyball court and net. Lots of fun stuff here, in the fill and the cluing. EUREKA! This puzzle was a great way to begin my Friday.
Malaika Handa