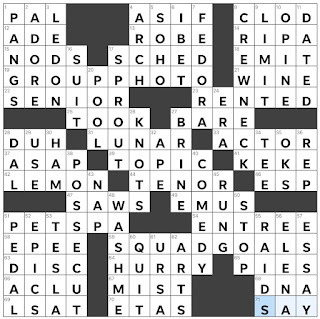 Theme Answers:
GROUP PHOTO (19A: Pic of multiple people)
SQUAD GOALS (59A: Possible caption for a 19-Across)
CREW NECK (8D: Sweatshirt with a round opening)
POSSE CUT (38D: Hip-hop song with several contributors)
Theme synopsis: The first word of each theme answer (the LEADER) is a synonym for TEAM. We have a GROUP, a SQUAD, a CREW, and a POSSE.
And now a word from our constructors:
Brooke:  I love this puzzle! It's pretty rare that I go for a "pinwheel" arrangement of theme answers but Mark crushed it with gridding here complete with some very cool black square shapes. I super love how the SQUAD GOALS clue ties in with the GROUP PHOTO clue (thanks Erik!) and I'm always here for Mark infusing his pop culture fluency into clues in an easy-to-solve way; my favorites are KEKE Palmer, Billy Porter, Destiny's Child, ADORE Delano, to name a few!
Mark: I find this puzzle really fitting considering Brooke is the best teammate! She constantly pushes me to challenge myself in new ways in each puzzle we create together to make me a better constructor! I would have never thought of a pinwheel grid shape for our themers, and she rounded out the set with POSSE CUT. Erik Agard is also a huge part of this team behind the puzzle, editing and adding the awesome clues to link GROUP PHOTO and SQUAD GOALS. Until next time, you can probably find Brooke and me dancing to 71A in the West Village.
Things I learned:
Random thoughts and interesting things:
Geography review:
A nice collection of theme answers today promoting TEAMwork. It's quite appropriate that this puzzle is a collaborative effort. The pinwheel layout - with two theme answers horizontal and two theme answers vertical - works in this situation because the theme consists of a pair of 8-letter and a pair of 10-letter theme answers. The advantage to this type of layout, from a constructing standpoint, is that each theme answer is essentially in its own part of the grid, allowing lots of breathing room. Although it's not related to the theme, I really liked the positioning of the word TOPIC in the exact center of the grid. The TOPIC of today's puzzle is TEAM LEADERS... This puzzle was a delightful start to my Tuesday.
Brooke Husic Mark Valdez