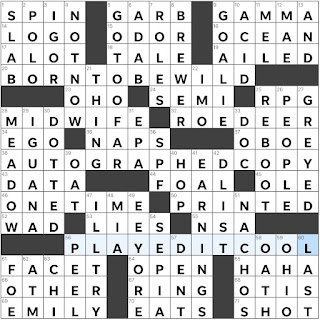 Theme Answers:
BORN TO BE WILD (20A:1968 Steppenwolf hit)
AUTOGRAPHED COPY (38A: Book signed by the author)
PLAYED IT COOL (56A: Tried to act casual)
Theme synopsis: The last word (TAIL end) of each theme answer can be placed in front of the word CAT, giving us a WILDCAT, a COPYCAT, and a COOL CAT.
Things I learned:
Random thoughts and interesting things:
Geography review:
Well, you've probably guessed that my CAT, Willow, 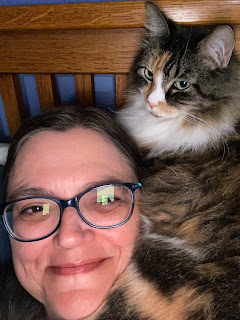 was quite pleased to see CATTAILS as the title of this puzzle. Her favorite theme answer was PLAYED IT COOL, as she definitely thinks she's a COOL CAT. Smooth fill and interesting cluing all around today. I especially enjoyed the conversational clues for OHO (23A: "Well, well, well!"), HAHA (65A: "Very funny!") and NOT NOW (4D: "Maybe later"). Congratulations to Christina Iverson who is making her USA Today debut today! I have enjoyed solving Christina's puzzles in other venues, and so was familiar with her byline and happy to see it. In fact, today's Universal crossword was also constructed by Christina. This puzzle was a delightful way to begin my Monday.
Christina Iverson