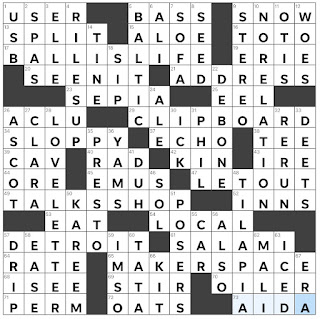 Theme Answers:
BALL IS LIFE (17A: Devoted hooper's motto)
CLIPBOARD (29A: Petition holder)
TALKS SHOP (49A: Discusses work at happy hour, for example)
MAKERSPACE (65A: Communal creation location)
Theme synopsis: The first part of each theme answer can FOLLOW THE word MONEY to create a new phrase. We have MONEYBALL, MONEY CLIP, MONEY TALKS, and MONEYMAKER.
Things I learned:
Random thoughts and interesting things:
Geography review:
FOLLOW THE MONEY is a fun puzzle title, and the puzzle itself is enjoyable as well. Although I'm not a devoted basketball fan, BALL IS LIFE is my favorite theme answer today. It's so playful and fun. I enjoyed the cluing today, as you probably noticed from my comments above. In addition to those entries I've already highlighted, I especially liked NO RELATION (10D: Clarification regarding two people with the same last name). I haven't had to use that explanation at all since I've been married, but my maiden name was Hayes, as in the 19th president of the U.S., Rutherford B. Hayes - NO RELATION. This puzzle was a delightful way to begin my Thursday.
Occasionally I like to let you know about things happening in the crossword world, and I have three things to tell you about today.
First, Boswords, which provides seasonal crossword events organized by John Lieb and Andrew Kingsley, has opened up registration for their Fall Themeless League. The League will be held on Monday evenings in October and November. You can choose the difficulty at which you'd like to compete. The Boswords events are always a delight, not only for the puzzles, but also for the accompanying interviews. Also, you'll recognize the names of some of the constructors for the Fall League from the USA Today constructor roster. If you like your puzzles on the easier side, this puzzle league still has a spot for you. I've demoted myself from the Choppy (medium hard) division to the Smooth (easiest) division for the Boswords Fall League. Feel free to join me!
Secondly, guest blogger for Sally's Take, Sid Sivakumar has offered to send four crossword puzzles to anyone making a donation of $10 or more to an organization that supports Afghan women and girls. Sid has provided a list of such organizations on his website. Sid has promised the puzzles are hard. If hard puzzles aren't your thing, you can still make a donation - it's definitely a worthy cause.
Thirdly, if you construct crossword puzzles, or have ever thought you might like to start constructing puzzles, there is a new resource available. It's a free wordlist called Spread the Word(list). The wordlist is curated by USA Today constructors, Enrique Henestroza Anguiano and Brooke Husic.
I know I said three things, but here's a bonus! If you'd like to receive more frequent news about happenings in the crossword world, I highly recommend subscribing to Matt Gritzmacher's email lists! Matt provides a daily email with links to published crosswords from a multitude of venues, and occasional "News and Notes" emails with updates on happenings. His emails are extremely informative and helpful.
Neville Fogarty