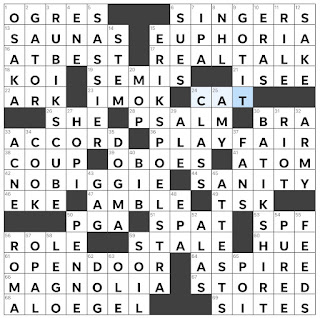 Theme Answers:
RUBIK'S CUBE ((3D: Six-sided twistable puzzle)
ERIK SPOELSTRA (15D: First Asian American coach in the NBA)
BATIK SHIRT (30D: Indonesian-style top)
Theme synopsis: Each vertical theme answer contains the letter string I-K-S, which spells the word SKI reading upwards.
Things I learned:
Random thoughts and interesting things:
If you're feeling down, this puzzle is here to provide a LIFT, a SKI LIFT, that is. RUBIK'S CUBE is my favorite theme answer today, and I also appreciated learning about ERIK SPOELSTRA. Quite a few lovely Across answers today, the aforementioned OPEN DOOR, EUPHORIA, and MAGNOLIA, but also AT BEST, REAL TALK, PLAY FAIR, and NO BIGGIE. Nothing STALE about this puzzle; it was a fine way to begin my Sunday.
Zhouqin Burnikel