Title: UP TO SOMETHING 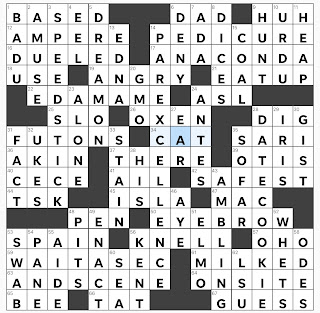 Theme Answers:
SPEED STICK (3D: Deodorant brand)
PAR EXCELLENCE (14D: Quintessential)
DATE COOKIE (28D: Chewy treat made with medjools)
Theme synopsis: The first word of each theme answer can be placed after the words UP TO in order to form a new phrase: UP TO SPEED, UP TO PAR, UP TO DATE.
Things I learned:
Random thoughts and interesting things:
Geography review:
In addition to the first words of the theme answer forming phrases when placed after the words "UP TO," since the theme answers are vertical, these words are UP in the puzzle. Although the theme would have worked with the theme answers placed horizontally, it's a nice touch to place them vertically. Some fun cluing today. I particularly enjoyed EAR (27D: Organ near a temple), TAT (66A: Pic on a pec), and ELMO (51D: Muppet who's always 3.5 years old). A couple of words we don't see often: KNELL and WHETS. This puzzle was an enjoyable way to begin my Sunday.
Zhouqin Burnikel