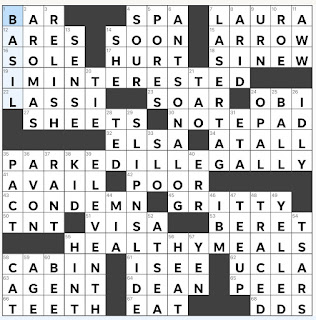 Theme Answers:
I'M INTERESTED (19A: "Ooh, tell me more!")
PARKED ILLEGALLY (35A: At risk of being towed)
HEALTHY MEALS (55A: Nutritionist's recs)
Theme synopsis: Each theme answer contains the name of an HERB spanning the two words. In our HERB-STUFFED garden of theme answers we find MINT, DILL, and THYME.
Things I learned:
Random thoughts and interesting things:

This is a delicious puzzle - you can almost smell the AROMAS of MINT, DILL, and THYME (and BASIL!) as you're solving. (That might just be the result of the HERB garden on my patio...) I also liked that the theme answer HEALTHY MEALS not only contains a hidden HERB in its letters, but might actually contain HERBS. There are plenty of other enjoyable answers in addition to the theme, including LASER TAG, ANTS ON A LOG, and SLIP 'N SLIDE. This is the second USA Today puzzle from co-constructors Emily Sharp and Kunal Nabar, and it was a great way to begin my Tuesday.
Emily Sharp Kunal Nabar