Title: OUT WITH IT 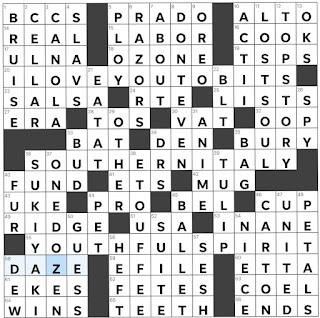 Theme Answers:
I LOVE YOU TO BITS (20A: Words of deep affection)
SOUTHERN ITALY (36A: Capri and Naples region)
YOUTHFUL SPIRIT (55A: Opposite of an old soul)
Theme synopsis: Each theme answer contains the word OUT, and also the word IT. In other words, each theme answer contains OUT WITH IT.
Things I learned:
Random thoughts and interesting things:
Geography review:
I enjoyed this playful theme, reinterpreting the phrase "OUT WITH IT!" to literally mean the words OUT and IT together. Also uplifting to have the puzzle tell me, "I LOVE YOU TO BITS."  I enjoyed the contrast between the answers LOST SOUL and YOUTHFUL SPIRIT. I also liked the sassy DON'T EVEN! This puzzle was a great way to begin my Sunday.
Zhouqin Burnikel