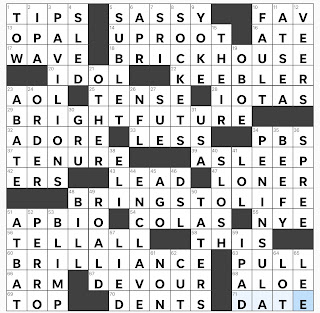 Theme Answers:
BRICK HOUSE (18A: "Three Little Pigs" abode that thwarts the Big Bad Wolf)
BRIGHT FUTURE (29A: Happy and successful time to look forward to)
BRINGS TO LIFE (48A: Infuses with liveliness)
BRILLIANCE (60A: Exceptional intelligence)
Theme synopsis: Each theme answered is SANDWICHed inside of CHEESE, in this case the CHEESE is BRIE, with the letters BRI- at the beginning of each theme answer and the letter -E at the end.
Things I learned:
Random thoughts and interesting things:
Geography review:
The BRIE serves as the bread in today's theme answer SANDWICHes. The BRILLIANCE of the answers BRIGHT FUTURE and BRINGS TO LIFE were lovely. I also liked that the BRIE break was consistent throughout the themers. PAVILIONS and PENINSULA were nice long Down answers. I especially liked the clue for ASLEEP (39A: Like Clara for most of "The Nutcracker"). This puzzle was an enjoyable way to begin my birthday!
I have previously mentioned the 7xwords puzzle project. I constructed today's puzzle, and I invite you to check it out. Happy solving!
Sara Cantor