Title: FEW AND FAR BETWEEN 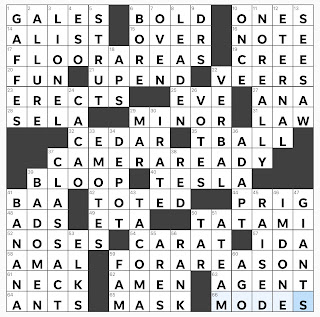 Theme Answers:
FLOOR AREAS (17A: Building stats)
CAMERA READY (37A: Wearing makeup and a stylish outfit, say)
FOR A REASON (59A: Purposely)
Theme synopsis: Each theme answer contains the word RARE, with the letters split BETWEEN the words.
Things I learned:
Random thoughts and interesting things:
Geography review:
It took me quite some time to figure out the theme of this puzzle. I first noticed that each theme answer contains the word AREA, but could not figure out the connection between AREA and the title FEW AND FAR BETWEEN. I then noticed the first two theme answers contain the letters of the word FAR, but this is not true of CAMERA READY. There was a satisfying "Aha!" moment when I spotted the word RARE in CAMERA READY and confirmed its presence in FLOOR AREAS and FOR A REASON. My favorite theme answer today is FOR A REASON. I also enjoyed the answers NO REALLY, I'M DONE, and CLASS ACT. This puzzle was a nice way to begin my Sunday.
Zhouqin Burnikel