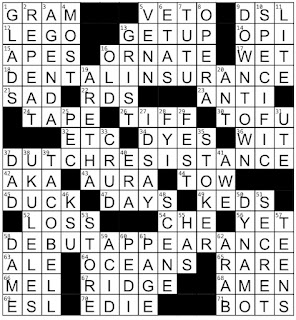 Theme Answers:
DENTAL INSURANCE (18A: Health coverage for teeth)
DUTCH RESISTANCE (37A: Netherlands-based movement during World War II)
DEBUT APPEARANCE (58A: First performance)
Theme synopsis: Each theme answer BREAKs the word DANCE so that the D- occurs at the beginning of the theme answer and -ANCE at the end.
Things I learned:
Random thoughts and interesting things:
Geography review:
Friday is a good day to take a DANCE BREAK and BREAK DANCE. Alternatively, if you are not too coordinated (that's me!) perhaps it's a good day to solve a puzzle that BREAKs DANCE in the theme answers. Always fun to see grid-spanning theme answers, though none of these felt particularly flashy. (Then again, it's a BREAK DANCE puzzle, not a flash DANCE puzzle...) I enjoyed seeing GLADS and SAD crossing in the grid, and the mini-conversation in the middle of the puzzle with I'D SAY and FYI. Plenty of sparkly "bonus" fill today: SECRET, DYNAMO, DOWNTOWN, UKULELES, TACO BELL to give SPECIFIC examples. This puzzle was an enjoyable way to begin my Friday.
Answer to geography quiz: In addition to the Arctic and Atlantic, Earth's OCEANS include the Indian, Pacific, and Southern (also known as the Antarctic).
Stella Zawistowski