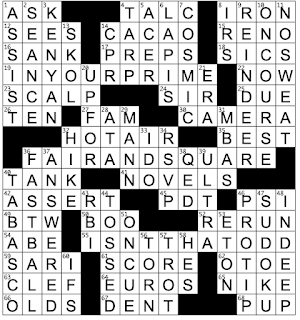 Theme Answers:
IN YOUR PRIME (19A: At the peak of life)
FAIR AND SQUARE (36A: Without cheating)
ISN'T THAT ODD (55A: "Rather curious, don't you think?")
Theme synopsis: The last word of each EXPRESSION used as a theme answer can be used to describe a type of number. We have PRIME numbers, SQUARE numbers, and ODD numbers.
Things I learned:
Random thoughts and interesting things:
Geography review:
How about some math with your word puzzle today? I enjoy math and numbers, and so when I saw the title NUMERICAL EXPRESSIONS, I looked forward to some number fun, and I was not disappointed. The theme answers today are all delightful EXPRESSIONS in their own right - IN YOUR PRIME, FAIR AND SQUARE, ISN'T THAT ODD? - all lovely. I appreciated that the words PRIME, SQUARE, and ODD are not used to refer to numbers in these expressions, so their meaning is changed when they are paired with the word "number." And for those that appreciate math, it's fun to note that no single number is PRIME, SQUARE, and ODD. Given the mathematical theme, I appreciated the additional number and math related content in the puzzle: TEN, SUDOKU, QED. This puzzle was a fantastic way to begin my Thursday.
Enrique Henestroza Anguiano